User registration is disabled in this demo.

Please enter your username or email address. You will receive a link to create a new password via email.

Naples, Fla. – Like all industries impacted by the COVID-19 pandemic, the Naples area housing market was not immune to its effect in March. While home sales dropped, home prices remained steady, and in some cases, increased. Because the stay-at-home order went into effect mid-month, real estate activity during the first two weeks of March was strong, while activity during the second half of March tempered remarkably well. Brokers analyzing the March 2020 Market Report released by the Naples Area Board of REALTORS® (NABOR®), agree that the report showed one indisputable truth: The need for housing in the Naples area – whether it be a rental, new home construction, or homes in the resale market – is essential and still in demand.

Coco Amar pointed out that the report showed closed sales for properties priced between $1 million and $2 million increased 23 percent year over year (12-months ending March 2020) and its median closed price decreased by 2.3 percent. “The high-end of the market is becoming popular again, especially condominiums over $2 million, which had the highest percentage increase in sales [37 percent] in the last 12 months.”

Bill Coffey pointed out that “even though showings in March decreased 41 percent compared to showings in February, there were still over 19,000 appointments scheduled to show homes in March. Serious buyers are not being discouraged by the stay-at-home order. Because real estate is considered essential, buyers can tour homes as long as they abide by the social-distancing order – or they can tour homes virtually with their REALTOR on site hosting their virtual tour.”

Open house guidelines by NABOR®, which follow Centers for Disease Control and local Department of Health recommendations, ensure safety practices are being followed by REALTORS®. Questions about open house guidance during COVID-19 can be found HERE.

Mike Hughes added that homebuyers were not the only people looking for housing in March. “We saw an uptick in rental contract extensions in March as many winter residents are choosing to stay in the Naples area rather than return to their northern homes in states where virus activity rates are high.”

The March report showed overall inventory remained strong through March, with 5,772 available properties. This was a 27.5 percent decrease in inventory compared to March 2019, which had 7,965 properties available. Interestingly, while March had only 53 fewer homes on the market than what was available in February, the month of March had 11 more homes available in inventory than what was reported in January! Plus, Collier County holds steady with 6.4 months of supply compared to other highly desirable counties in Florida like Orlando, which reported 2.3 months of supply in March.

Jones also pointed out that the pandemic is affecting the new home construction industry. “Many builders in the area are offering big incentives in order to move their new home inventory. It’s good to work with a REALTOR® who understands the local market well and can negotiate the best price, whether it’s a home for sale by a builder or an independent seller of an existing home.” 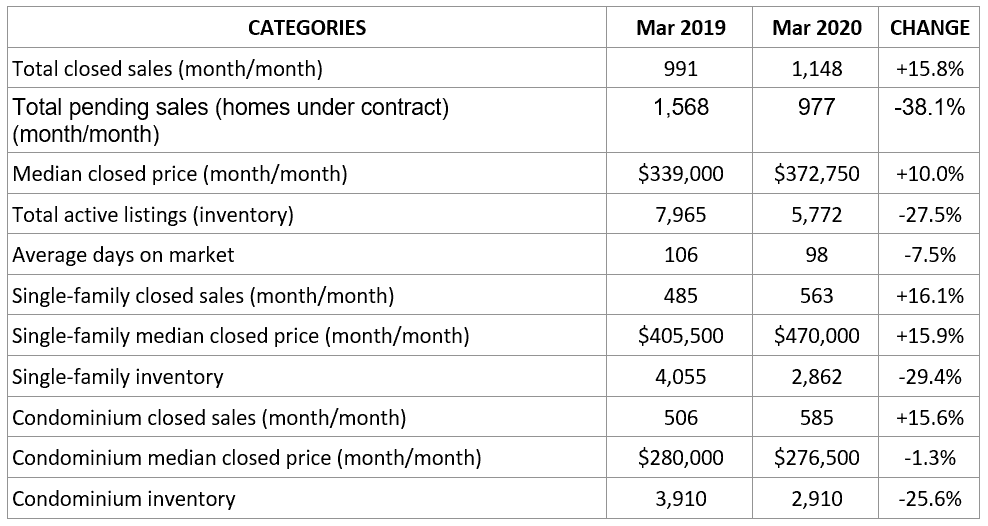 “There is solid inventory in all price categories right now,” said Hughes. Phil Wood agreed with Hughes adding that “current low interest rates and a strong stock market are favorable reasons why people buy second homes. Low fuel prices will also inspire people to travel more by air and car to Southwest Florida once the -stay-at-home order is lifted. It may take a few months to get back to normal, but I believe the housing market in Naples will recover fast because people love the beach and we have 24 miles of it to explore. Plus, after being locked at home for months, people are going to want to live in a community that doesn’t have high-density issues.”

Want to look at some NABOR® Statistics?

This report was provided by NABOR®

#TeamCalusa is getting it done this year! Despite all of the challenges and potential drawbacks...